If laws are put into place to protect us. Then why is cannabis illegal? It has never hurt anyone. The worst affect that it has it making the user hungry, happy, or sleepy. In most cases that is the goal anyway. What is the real danger to cannabis? Getting caught with it, thats what. Thousands of people are arrested every year for simple possession of this plant. Its crazy that thousands of people die every year from alcohol. Yet, it is legal, openly sold and advertised. The same goes for caffeine. Im a coffee drinker. Honestly my favorite combination is coffee and cannabis in the morning. That does not change the fact that caffeine kills more people every year than cannabis has in its whole existence. Thats not just me making things up either. Do your own research. You will see the facts. Over half of the states are saying that this plant the federal government classifies as a schedule I, which means that they believe that is as zero medical value, is medicine. How can the federal government say one thing but my state government say another? It is because our federal government has been lying to us for almost 100 years. Before prohibition hemp was used to feed live stock. That includes pigs and cows. Hemp is high in CBD. Therefor when the animal is killed for food the CBD in its body is transferred  to the meat our ancestors were eating. Your forefathers were eating CBD rich food! Cannabis is a integral part of our body. That is why we have a endocannabinoid system. The moral of the story here is. We have been lied to for a century by the people we put in power to look out for our best interest.  Educate yourself in this time of technology. Do not allow yourself to become a sheep to the powers at be. 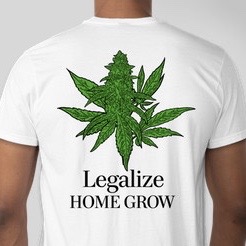 Help us get home grow legalized in Florida! All profits will be used to bring home grow and a social equity program to Florida. Note Size in comments +$2.50 for 2XL & 3XL

Strain of the Month